To be ruthless is to be powerful, at least it is on the Battersea streets...

Georgina Garrett was born to be ruthless and she’s about to earn her reputation.

As World War One is announced a baby girl is born. Little do people know that she's going to grow up to rule the streets of Battersea. From a family steeped in poverty the only way to survive is with street smarts.

With a father who steals for a living, a grandmother who’s a woman of the night and a mother long dead, Georgina was never in for an easy life. But after a tragic event left her father shaken he makes a decision that will change the course of all their lives – to raise Georgina as George, ensuring her safety but marking the start of her life of crime…

Review
Trickster is the debut novel from Sam Michaels set in the gritty crime-ridden streets of Battersea just as World War One is breaking out and follows the story of Georgina Garrett.

Georgina didn’t have the best start in life as her mother dies when she was born and then she was kidnapped as a toddler and abused. After that her dad decided she was safer to be brought up as a boy and follow him into the thieving trade. George as she then became was tough and took no nonsense from anyone, even the local bully Billy Wilcox and his gang.

The story follows George through her life until her early twenties during this time she experience many brushes with the law, threats from Billy Wilcox and even heartache as she watches her best friend Molly Mimple suffer in squalor, but George emerges a strong, smart and ruthless young women who has learnt to hide her emotional scars from those she cares about.

Sam Michaels has done a great job capturing the realism of this time period. It was a harsh time for the poor of London, often resorting to prostitution and thieving just to survive. The fear people had of heavy gangs such as the Wilcox’s and equally the police resonates throughout the book. For this reason, I did find this a tough book for me to read as it deals with many sensitive subjects such as domestic abuse, rape, child abuse and murder which are written about in enough detail to make me feel squeamish on more than one occasion.

I enjoyed reading this book and seeing how George developed as a character. I was thrown by the last few chapters where she suddenly decides to become Georgina again and finds herself a love interest. I did feel some of her rough and ready attitude melted away in his presence and was very out of character, perhaps this is a storyline which will develop in the next book.

Talking of the next book I’m intrigued to see where Sam Michaels will take Georgina next as I felt Trickster ended with a dramatic conclusion for all the characters.
Thank you so much to Aria and Netgalley for sending me a copy to review and for inviting me to be part of this blog tour. 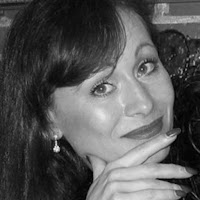 Sam Michaels lives in Spain with her family and plethora of animals. Having been writing for years Trickster is her debut novel.