Blurb
She was never mine to lose…

When Scarlett falls asleep on a Caribbean beach she awakes to her worst nightmare – Katie is gone. With all fingers pointed to her Scarlett must risk everything to clear her name.

As Scarlett begins to unravel the complicated past of Katie’s mother she begins to think there’s more to Katie’s disappearance than meets the eye. But who would want to steal a child? And how did no-one see anything on the small island?

Review
She’s Mine is the debut novel of Claire S. Lewis. While Scarlett is sleeping on the beach, Katie the little girl Scarlett is supposed to be watching goes missing. With Scarlett’s involvement with the disappearance coming under suspicion, Scarlett knows she’ll have to work out what really happened to Katie herself and as she begins to unravel the mysteries surrounding Katie and her mother, she’s not sure what to believe anymore.
This is a twisty psychological thriller which is split between two narratives, the present day and the past. It was not a book I instantly loved as I felt the start was a bit slow and I felt the story lacked urgency which I would expect with a missing child story, the police investigation was very lack-lustre and clumsy. After a steady start the story and the pace increased to create a more dramatic storyline which had me gripped until the shocking ending.
Scarlett was not the most likeable of characters, she often used information she had to her own advantage and you could never be totally sure she was being completely honest, but I think that’s the beauty of this novel is working out who is telling the truth,  something I changed my mind about throughout the book and I found kept me reading.
The best part of the story for me was the narrative from the past which explored the relationship between the twins through key moments in their lives linked to photographs. I found their relationship fascinating and wanted to find out more, more than I wanted to find out what happened to little Katie. 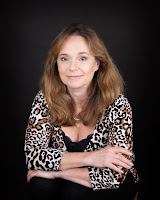 Claire Simone Lewis studied philosophy, French literature and international relations at the universities of Oxford and Cambridge before starting her career in aviation law with a City law firm and later as an in-house lawyer at Virgin Atlantic Airways.  More recently, she turned to writing psychological suspense, taking courses at the Faber Academy. She’s Mine is her first novel. Born in Paris, she’s bilingual and lives in Surrey with her family.