Blurb
Ethan is an exceptionally gifted young boy, obsessed with physics and astronomy.
His single mother Claire is fiercely protective of her brilliant, vulnerable son. But she can't shield him forever from learning the truth about what happened to him when he was a baby; why Mark had to leave them all those years ago.
Now age twelve, Ethan is increasingly curious about his past, especially his father's absence in his life. When he intercepts a letter to Claire from Mark, he opens a lifetime of feelings that, like gravity, will pull the three together again.
Relativity is a tender and triumphant story about unbreakable bonds, irreversible acts, and testing the limits of love and forgiveness.


Relativity by Antonia Hayes is the story of Ethan, a twelve year old boy who is trying to make sense of the world using the laws of psychics and astronomy. He lives with just his mother Claire and wants to know more about his absent father, who Claire is reluctant to talk about. One day Ethan finds a letter from his father Mark and behind Claire’s back he goes to meet his father. As the three become drawn back together they begin to realise that some things can’t be changed or forgiven and that one small event from the past will have a lasting impact on their future together.


I found this a beautifully written novel full of raw emotions. It’s clear to see how much Claire loves Ethan and is determined to do her best for him, no matter the cost. When Mark turns up you can feel the conflict in her actions as she tries to resist the man she once adored, the same man who shattered her whole life in just a few minutes.


Ethan, loves his mother but knows without his dad he’s different from the other kids. He’s extreme knowledge of physics set him apart from the other and he longs for his dad to return to so he can be a normal kid again. It was hard to read about Ethan’s struggles at school, kids are cruel and always seem to pick on those most vulnerable.


Mark seems to have lived a life full of regret and when these three are reunited I was longing for them to find their happy ever after and just a happy family, but fate doesn’t always give us what we want.


I did find this quite a heavy read with all the emotions flying around and the incredible amount of science talk which is mentioned. The one thing I think which lightened the whole story for me was the introduction of Alison. I just loved her sense of humour and the way she was with Ethan, just two kids being together having fun and mad cap plans.


Relativity is a book which did bring tears to my eyes as there are some powerfully emotive scenes which has made this a book which has stayed with me after I’ve finished reading. It’s a book a highly recommend if you’re looking for a beautiful and emotional story.


Thank you to Corsair for inviting me on the blog tour and for sending me a review copy.
Posted by That Thing She Reads at 13:00 No comments:

Blog Tour: A Boy Made of Blocks by Keith Stuart

A Boy Made of Blocks by Keith Stuart
Published: December 29th 2016
Publisher: Sphere
Pages: 387
Available in Hardback, Paperback and on Kindle
Order now from Amazon
Rating:5/5

Blurb
MEET THIRTY SOMETHING DAD, ALEX… He loves his wife Jody, but has forgotten how to show it. He loves his son Sam, but doesn't understand him. Something has to change. And he needs to start with himself.
MEET EIGHT-YEAR-OLD SAM… To him the world is a puzzle he can't solve on his own.
When Sam starts to play Minecraft, it opens up a place where Alex and Sam begin to rediscover both themselves and each other… When life starts to tear one family apart, can they put themselves back together, one piece at a time?

Review
A Boy Made of Blocks by Keith Stuart is an incredibly uplifting novel about learning to see the world around us from a different perspective. It’s a novel which will make you laugh and cry and embrace life in any way you can.
Alex and Jody have an eight year old son Sam who has recently being diagnosed as autistic. It has been an uphill battle to get this diagnosis and after have caused a strain between Jody and Alex. Alex unable to deal with his son’s random outbursts has hidden himself away using his job as an excuse. Left on her own to try and support Sam as best she can Jody has finally had enough and told Alex he has to leave.
Alex heads to best friend Dan’s house, who without question lets him in and allows Alex to wallow in his own selfish self-pity. It isn’t until Alex loses his job that he finally begins to realise he has to change and has to find a way to connect with Sam. Surprisingly this connection comes in the form of the game Minecraft. As Sam begins to play the game, he finds a world he can relate to and when Alex joins him playing he begins to communicate and form a bond with his son.
As Alex begins to understand more how his son sees the world the also begins to see his own life differently and slowly Alex begins to find his own place in the world that he has been searching for, for almost twenty years.
Alex was not a character I warmed to initially. He seemed quite selfish, if he didn’t want to deal with something he just walked away and let others get on with it, blaming the fact he didn’t understand autism as a get out cause. He seemed like he was lost in his own world, reliving the past over and over and he needed to find something to connect himself to the present and to his family. It wasn’t until a third of the way through the book where Alex becomes more aware of other people’s needs and then as he began to see things more from Sam’s point of view he became quite a nice guy.
A Boy Made of Blocks is a story of family trying to put themselves back together after a breakdown, rather like the Minecraft game, slowly piece by piece they begin to connect together again. It’s a story of learning to trust, to trust each other, to follow our instincts and trust that everything will turn out okay in the end. Most of all it’s a book about accepting who we are and celebrating each and every milestone and achievement no matter how small or difficult, because after all like the book says “Life’s an adventure, not a walk – that’s why it’s difficult”.
Keith Stuart has written an engaging and heartfelt novel which I enjoyed very much. He has truly captured the relationship between Alex and Sam and it was a pleasure to follow along on their journey of self-discovery.
Thank you to Sphere for inviting me on the blog tour and providing me with a review copy.

Email ThisBlogThis!Share to TwitterShare to FacebookShare to Pinterest
Labels: 2016, A Boy Made of Blocks, Keith Stuart, Sphere 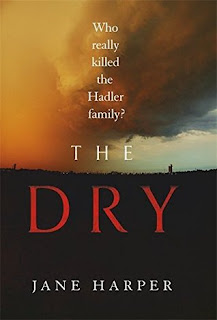 Amid the worst drought to ravage Australia in a century, it hasn't rained in small country town Kiewarra for two years. Tensions in the community become unbearable when three members of the Hadler family are brutally murdered. Everyone thinks Luke Hadler, who committed suicide after slaughtering his wife and six-year-old son, is guilty.
Policeman Aaron Falk returns to the town of his youth for the funeral of his childhood best friend, and is unwillingly drawn into the investigation. As questions mount and suspicion spreads through the town, Falk is forced to confront the community that rejected him twenty years earlier. Because Falk and Luke Hadler shared a secret, one which Luke's death threatens to unearth. And as Falk probes deeper into the killings, secrets from his past and why he left home bubble to the surface as he questions the truth of his friend's crime.


The Dry by Jane Harper is Little Brown’s lead debut of 2017, quite a statement but one it most definitely is worthy of, the book is nothing short of epic. It’s one of those rare book’s that so completely absorbs you that the only thing that matters is reading the whole thing.


Set in the small county town of Kiewarra, The Dry follows the story of a town on edge after suffering from a two year drought.  Devastation hits the community when the Hadler family are found brutality murdered in their own home.  Tensions run high and the town are convinced Luke Hadler committed suicide after he murdered his wife and young son Billy.


Returning to Kiewarra after twenty years away Aaron Falk comes face to face with the secrets of his past he attends the funeral of his childhood best friend Luke. Aaron was driven out of town as a child after his friend Ellie Deacon was found drown in the river. He’s counting down the hours until he can leave again until Gerry Hadler asks him to check over Luke’s accounts to see if Luke really did snap like the town believe.


As Falk begins to examine the death of his friend, secrets from his past begin to emerge, for Falk and Luke shared a secret. A secret which twenty years ago drove Falk out of town, a secret which has begun to cause trouble again and a secret which could explain why Luke is now dead.


I found The Dry to be a truly fantastic read, everything about it works so well. The setting, the characters, and the plot they all worked seamlessly to create a truly absorbing and at times harrowing read.  The dry arid landscape of Kiewarra perfectly matches the tension and unrest of its habitants as they battle to keep their town alive despite the drought killing off crops and animals, making the lives of the farming folk hard and unforgiving. At times it really felt like I was there in the town breathing the hot dry air and feeling the unease grow.


Harper has created many complex characters, each with their own secrets to hide or burdens to carry and this made them fascinating to read about. I loved the way Harper has included flashbacks to the teenage lives of Aaron, Luke and Ellie so we can really get a picture of who they were. I so wanted Luke to not be responsible for something as horrific as killing his own wife. As despite being fairly self-centred as a child he seemed like he was a valued member of the community.


I loved the way that as Falk uncovers more and more details about the last few hours of the Hadler’s lives various members of the community are under the spotlight as possible killers adding more and more twists to this intense novel. The final twist revealing who the killer was left me in shock as it was a total curveball from what I was expecting, brilliantly done. Finding out what really happened to Ellie all those years ago did leave deeply saddened that she was so close to freedom.


The Dry is a perfectly written novel and one which has been a joy to read. I’m overwhelmed this is Jane Harper’s debut as it’s so good, definitely one of the must-reads of 2017 and I can’t wait to see what this lady writes next.


Thank you to Little Brown for sending me a copy to review and for inviting me on this blog tour.