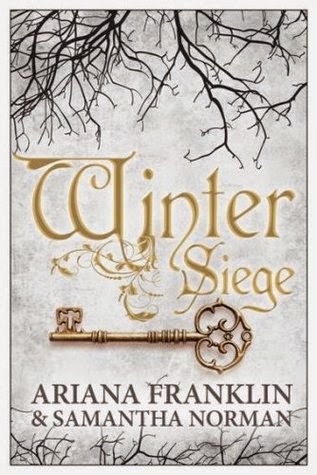 Gwil, a battle-hardened mercenary, is horrified to stumble across a little girl close to death. She has been attacked, just one more victim in a winter of atrocities. Clutching a sliver of parchment, she is terrified – but Gwil knows what he must do. He will bring her back to life. He will train her to fight. And together, they will hunt down the man who did this to her.

But danger looms wherever they turn. As castle after castle falls victim to siege, the icy Fens ring with rumours of a madman, of murder – and of a small piece of parchment with a terrible secret to tell, the cost of which none of them could have imagined . . .


Winter Siege is a historical novel set in 1141 at the time of the Anarchy between King Stephen and his cousin Empress Matilda, daughter of Henry I. The tale is based on Gwil, a mercenary with a kind heart, Penda the young girl who Gwil takes under his wing after she is brutally attacked and Lady Maud of Kenniford, whose castle comes under siege from the feuding royals.


I have to confess that before being asked to be part of this blog tour I had never read any of Ariana Franklin’s novels, or even heard her name before. Having read one I can understand why she has such a following, Winter Siege is a tale which draws you into the lives of the three main characters and makes you emotionally attached to them. I would love to have been able to spot the point where Samantha Norman took over writing, however I found it flowed seamlessly from beginning to end.


I felt this book did have a slow start and it wasn’t until Gwil, Penda and Maud were altogether that I really began to enjoy the story as that was when we got to know more about the feelings of both Penda and Maud which was far more enjoyable to me the battle for who was going to be England’s ruler. My favourite character was Penda, I thought she made a brilliant male and female character and would love there to be a follow up book to find out what happened next to her. I loved the way she changed from being shy and frightened to being quite cheeky, especially with Gwil and also that she stood and shot her bow with the men which must have been pretty daunting for anyone.


One thing that did bother me about this book was the over use of expletive words which were used in the dialogue throughout the book, so if this bothers you be warned.


Overall I found Winter Siege to be an enjoyable and will in the future seek out Ariana Franklin’s previous novels and look out for anything else which Samantha Norman writes. I would rate this book 4/5.


Thank you to Transworld for my review copy and asking me to join with this tour, please visit other blogs on the tour for more insight into this book.
Posted by That Thing She Reads at 07:00