Blurb
Jennifer Sinclair’s fight to save her political career, her family and her freedom has failed. Traumatised by prison violence, she agrees to transfer to the mysterious British Values Centre.

Rita Gurumurthy has betrayed her country and failed the children in her care. Unlike Jennifer, she has no choice, but finds herself in the centre against her will.

Both women are expected to conform, to prove their loyalty to the state and to betray everything they hold dear. One attempts to comply, while the other rebels. Will either succeed in regaining her freedom?

Divide and Rule is 1984 for the 21st century - a chilling thriller examining the ruthless measures the state will take to ensure obedience, and the impact on two women.

Review
Divide and Rule is the second book in Rachel McLean’s Division Bell Trilogy and the sequel to A House Divided. In this book MP Jennifer Sinclair has been imprisoned after being found to be helping her son Samir, who was suspected of terrorist behaviour. Jennifer has been sent to a secure facility where she is to be rehabilitated and must prove her loyalty to the state, something Jennifer initially thinks will be easy but soon learns there is much more behind the supposed “celebration” than they are led to believe.
Rita Gurumurthy is a teacher who also finds herself imprisoned by the state as she fails to teach her children the British Values Oath as prescribed by the new government. Rita finds the institution difficult as is unwilling to relent on her views. Can either of them find away to “cheat” the system and find a way out.
Just like Rachel McLean’s previous book A House Divided I found Divide and Rule to be gripping right from the start and it had a chilling and sinister feel running throughout it as both Jennifer and Rita experience a Big Brother type regime like in 1984. I did find the story dragged a little in the middle but regained pace towards the end where its left us with another cliff-hanger ending. I have loved this as I’ve been pondering different ways the trilogy cold end since finishing the book and I’m really looking forward now to finding out how Jennifer’s story ends.
I like the introduction to Rita into the story as it explores another view of the radical Britain Rachel McLean has created and I loved her determination not to let go of her initial beliefs. There are a couple more characters who play an important role in Jennifer’s story particularly Dr Mark Clarke and Meena Ashgar and I’m interested to know what happens to these two in the next book.
If you enjoyed Rachel McLean’s last book I’m certain you will enjoy this one just as much and look forward to the final instalment soon. If you haven’t read A House Divided yet, I urge you to do so as it’s a real page turner, just like this one. 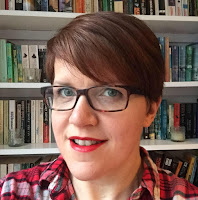 I'm Rachel McLean and I write thrillers and speculative fiction.

I'm told that the world wants upbeat, cheerful stories - well, I'm sorry but I can't help. My stories have an uncanny habit of predicting future events (and not the good ones). They're inspired by my work at the Environment Agency and the Labour Party and explore issues like climate change, Islamophobia, the refugee crisis and sexism in high places. All with a focus on how these impact individual people and families.