Top Ten Tuesday is a weekly event hosted by The Broke and the Bookish who love list making an reading. Each week there is a different book related list to create and share with other bloggers and readers. This week's list is one I could probably produce a top ten for every week. I've listed here the ten most recent books I've received for review this year and will be reading in the next few weeks; 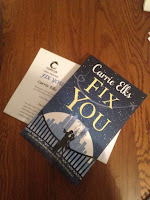 1. Fix You by Carrie Elks
You've found the one, but what if life has other plans?

London, 31st December 1999
At a party to toast the new millennium, Hanna meets Richard. He is a gorgeous, wealthy New Yorker. She is a self-assured, beautiful Londoner with no interest in clean-cut American men. They are from different worlds and have nothing in common... except for their instant - and mutual - attraction to one another.
As the clocks chime midnight it is a new year and the beginning of a wonderful romance.

New York, 12th May 2012
Hanna, the girl who broke Richard's heart, walks into his Wall Street office - and back into his life - to reveal an explosive secret.

He was sure they were meant to be together forever, but she broke his heart so completely the last time, can he find a way to let her mend the pieces?

This sounds like a really great read and one I think I need to read soon. 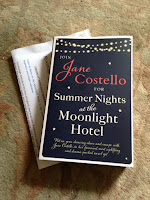 When Lauren agrees to sign up. it's because she loves the building so much; it holds the key to her most precious childhood memories and she always dreamed of dancing the night away under its roof. Even her newly single friends cate and Emily aren't going for the men, they're going for fun  - although a little romance won't hurt...

Then comes the news that the hotel has been sold to a faceless budget chain, which has devastating plans in store. And the revelation that marks the start of a chain of events - both on and off the dance floor - that puts the strength of their friendship to the ultimate test...

I love Jane Costello's writing and think I will love this book. Windermere is where I spent my own honeymoon so looking forward to reminiscing my own happy memories.

3. The Assistants by Camille Perri
What would you do if you thought you’d get away with it?
I folded the cheque and shoved it deep into the black hole darkness of my bag. At the time it seemed innocent enough. I would just, you know, bring the cheque home and then tear it to shreds.
For six years Tina has served drinks and collected dry-cleaning for a boss who spends more on lunch than Tina does on rent, and her debts are piling up. Then a blip in the expenses system offers her the opportunity to change her life, a big fat cheque that shouldn’t have her name on it. She’s a good person but the temptation is too much and Tina’s moral compass temporarily malfunctions.
But with wealth comes trouble. It doesn’t take long for one of Tina’s fellow assistants to notice – and she wants in. Tina may have an unlimited expense account but is she about to discover the limit to her luck?

I think this sounds like it could be a really funny an addictive read, can't wait to get started with this one.

4. The Second Love of my Life by Victoria Walters
In the Cornish town of Talting, everyone is famous for something.
Until recently Rose was known for many things: her infectious positivity; her unique artistic talent; and her devotion to childhood sweetheart Lucas.

But two years ago that changed in one unthinkable moment. Now, Rose is known for being the young woman who became a widow aged just twenty-four.

Though Rose knows that life must go on, the thought of carving out a new future for herself is one she can barely entertain. Until a newcomer, Robert, arrives in Talting for the summer...
Can Rose allow herself the chance to love again?

I have a feeling this could be one where tissues are needed...

5. Kit by Marina Fiorato
Dublin 1702...and Irish beauty Kit Kavanagh has everything she could want in life. Newly married, she runs a successful alehouse with her beloved husband Richard. The wars that rage in Europe over the Spanish throne seem a world away. But everything changes on the night that Richard simply disappears. Finding the Queen's shilling at the bottom of Richard's tankard, Kit realizes that her husband has been taken for a soldier. Kit follows Richard's trail across the battlefields of Italy in the Duke of Marlborough's regiment. Living as a man, risking her life in battle, she forms a close bond with her wry and handsome commanding officer Captain Ross. When she is forced to flee the regiment following a duel, she evades capture by dressing once more as a woman. But the war is not over for Kit. Her beauty catches the eye of the scheming Duke of Ormonde, who recruits her to spy upon the French. In her finery she meets Captain Ross once again, who seems just as drawn to the woman as he was to the soldier. Torn between Captain Ross and her loyalty to her husband, and under the orders of the English Crown, Kit finds that her life is in more danger now than on the battlefield. Of all the dangers that she faced, the greatest was discovery...

I received a hardback copy of this book for review last year but sadly I never managed to read it, the paperback in being released on 11th February so feel its time to read this one.

6. The Narrow Bed by Sophie Hannah

A killer the police have dubbed Billy Dead Mates is killing pairs of best friends, one by one. Just before each murder, he sends his victim a small white book...
Three regional police forces are working together to identify and catch Billy. For five months, they've been failing. Then a fifth victim, scared by what she's seen and heard on the news, comes forward to seek help. Unlike Billy's first four victims, she isn't dead. Yet.
Stand-up comedian Kim Tribbeck has one of Billy's peculiar white books. A stranger gave it to her after a gig she did a year ago. Was he Billy? Now Kim's life depends on working out why she - a woman who has no close friends because she trusts no one - should attract the attention of the Best Friends Killer... And, if Billy has her in his sights, why has he waited so long to strike?

I think this book sounds amazing. This is definitely the year I read a Sophie Hannah book, I have a number sitting on my shelf but this one sounds like her best yet.

7. The Night that Changed Everything by Laura Tait and Jimmy Rice

This is a love story of two halves.

People say it takes half the time you've been in a relationship with someone to get over them.

Rebecca and Ben thought they'd never have to test that theory - they were happy, in love, solid. They are perfectly matched: Ben is thoughtful, kind, and does all the cooking; Rebecca is fun and spontaneous, and often thinks about doing the cleaning but never actually does.

Neither of them predicted an encounter with the past that would tear their relationship apart.

I've yet to read anything by these two and I'm really looking forward to reading this one.

New home. New life. New beginning. Love affairs can blossom in the most unlikely places . . .
When Kitty inherits Bluebell Lodge from her grandmother, a farm in the beautiful Staffordshire countryside, it’s time for fresh air and a fresh start. Up to her elbows in chickens and ponies, Kitty soon realises there’s an awful lot to learn about farming. Still, at least the locals seem friendly, not least her handsome neighbour Tom…

But just as Kitty is beginning to find her feet, and the possibility of love, the discovery of a long-hidden diary, by a mysterious character called Violet changes everything. Who is Violet and what is her message for Kitty? As Kitty fills in the lost pieces of her family jigsaw and discovers some shocking revelations, will her countryside dream and blossoming relationship fall to pieces? When it comes to life in the country, nothing is ever quite as it seems …

I  love Christie's writing and am really looking forward to enjoying another one of her funny books. I just love the cover too...I'm so ready for spring and some sunshine!

9. Just Haven't Met You Yet by Cate Woods

Percy James has everything a girl could want: a comfy flat, a steady relationship and a truly lovely group of friends. Then she is approached by Eros Tech. Eros is 'the future of love' - an agency that brings together soulmates using mobile data. Percy has been identified as a match for one of Eros's super wealthy clients. The only problem is she already has a boyfriend . . . but what if this is *destiny*? Would you - could you - pass up a chance to meet your one true love?

This book is another which sounds like it could be hilarious.

10. You and Me, Always by Jill Mansell

On the morning of Lily's twenty-fifth birthday, it's time to open the very last letter written to her by her beloved mother, who died when she was eight.

Learning more about the first and only real love of her mum's life is a revelation. On the same day, Lily also meets Eddie Tessler, a man fleeing fame who just might have the ability to change her world in unimaginable ways. But her childhood friend Dan has his own reasons for not wanting Lily to get too carried away by Eddie's attentions.

Before long, secrets begin to emerge and Lily's friends and family become involved. In the beautiful Cotswold village of Stanton Langley, nothing will ever be the same again...

I read my first Jill Mansell novel last year and I adored it. I'm so looking forward to reading this and it will probably be my next  read as its released next week.

So there is my list for this week, I have a lovely pile of books to get stuck into over the next few weeks. I'd love to know what you've recently added to your TBR, leave your links below if you want to share, or visit The Broke and The Bookish to see everyone else's lists.